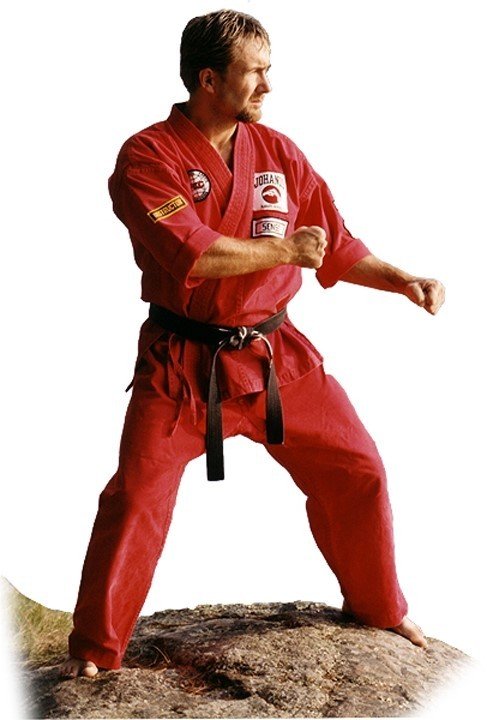 Kyoshi John Johanis is a Seventh-Degree Black Belt in Kempo Karate and a Black Sash in Chuan-Fa (Shaolin Kung-Fu) under Hanshi John Atkinson in the Canadian Karate Kung-Fu Association (CKKA). A martial arts instructor for over 26 years, he has taught programs across Canada, the United States, and the Caribbean. He is also a Certified Satori FIT Instructor.

In 1986, John moved to Orangeville and joined the Black Belt Institute on Broadway with Sensei John Atkinson. From his father’s advice, he knew to “take care of the teacher, because if you do, he will take care of you.”

John has continued to train with Sensei Atkinson (later promoted to Hanshi (Gentle-Man/Samurai) for his entire martial arts career. He earned his Shodan (First Degree) Black Belt in 1992 and Nidan (Second Degree) in 1994.

As a Second Degree Black Belt, and with the permission of the Black Belt Institute, John opened the first Johanis’ Karate School in 1994. He was invited into the CKKA as an Instructor in 1998 by Hanshi Alex Atkinson.

John earned his Sandan (Third Degree) in 1997 and Yondan (Fourth Degree) in 2001. He earned his Fifth Degree in 2006 and was promoted from Sensei (Instructor) to Shihan (Master). In 2012, John became a Sixth Degree and was ordered by the Black Belt Institute to assume the title of Kyoshi (Professor). He is proud to have received every Black Belt promotion from his original instructor, Hanshi John Atkinson.

John took a keen interest in Sport Karate tournaments. He competed across Canada and the US in circuits such as the National Black Belt League and the Sport Karate International League, and he was a Black Belt Can-Am Champion in 1994. He officially retired in 2002 after 16 years of Sport Karate competition.

John is the current Vice-President of the Black Belt Institute. In 2018, John was re-elected the Vice-President of the CKKA. He received the Humberto Medeiros Memorial Award in 2012 and the Chong Memorial Award in 2014—the highest honours in the CKKA given to those with “tenacity, fighting spirit, and years of dedication to the continued growth of the CKKA

Enjoying combat sports, John competed in Amateur Boxing at the Police Cadets Academy under “Captain” Jack Duggan. He has also trained with five-time Canadian Heavyweight Champion George Chuvalo. John has extensive experience in kickboxing, having the privilege to spar with World Kickboxing champions. He was also the captain of his high school wrestling team while competing in three weight classes simultaneously.

In his free time, John enjoys acting and has taken improv courses with Second City in Toronto. He has appeared on several TV shows and movies. As well as this, he also developed a JKS Black Belt Theatre in 2005: a theatre production putting on an annual “Black Belt Spectacular” to celebrate his students’ black belt promotions.

Kyoshi John’s black belts and certificates are proudly displayed in the dojo for everyone to see. However, many ask why there is a white belt displayed alongside? Well, in 1994 John earned his second degree (Nidan) black belt. A year or so later, in the summer of 1995, his car was stolen. When the police returned his car, all his belongings were gone, including his cherished Black Belt! John couldn’t bring himself to buy one as his black belt was an accomplishment that was priceless to him, and therefore irreplaceable. With this in mind, John put on his white belt again and continued training. John wore his white belt for more than two years until in 1997, he earned his third degree (Sandan) black belt, a belt he then proudly wore.